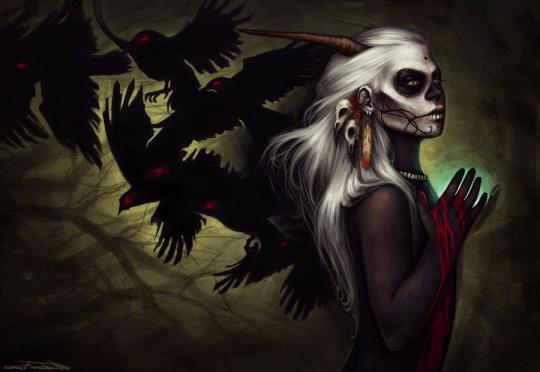 A basic introduction of the deity
Blood is the second and middle of the Weird Sisters, born of a triple union among Night, Wildness and Abundance, and containing within herself all the light and darkness and conflicting polarities of her parents. As such, she is both a power of destruction, chaos, and death, and a power of restoration, rebirth, and protection. Blood is everything we fear and revile – war, chaos, bloodshed, strife, death, destruction, abuse of power. But she is also the one that teaches us how to overcome those very things, the reminder that while we cannot change the past, we can change in the present to alter the future. She teaches us to conquer, to rise again from the ashes, to never give up and never give in. In her, all things return again as they were given, both good and ill. She is as unchanging and ever-changing and ageless as the Present, for it is the present that she rules over, that moment of Now which is as transmutable and slippery as sand through the fingers – the tighter and harder you grasp at it, the faster it is gone.

Names and epithets
Battle-Crow, Lady of Slaughter, Golden Woman, Glorious Queen, Battle-Armed, Battle-Sacrifice, Gold-Drunk, Mother of Battle, Shrieker, Queen of the Banshees, Fury, Lady of Swans, Lady of Ravens, Battle-Witch, Mistress of the Twisting, Lady of the Sacrifice, Lady of Blood, Mother of Pain, Alloter of Ills, War-Lusting, She Who Delights in Battle, Lady of Chance, Mother of Grief
Gullveig, Gieldwíg, Heid, Baduhenna, Catubodua, Badb Catha, Złota Baba, Nemain, Hervör Alvitr, Andraste, Enyo, Bellona, Verðandi and Kārta are all Euro-American deities and spirits that can potentially work in this slot, for those pursuing specific cultures and mythologies.
A non-Euro-American deity that works is Agasaya. Non-Euro-American deities that are similar, but with multiple distinct differences, are Anat and Kali.
A Euro-American (Finnish) deity that works but should probably not be used due to oppression/appropriation issues is Vammatar.

Variations on this deity (aspects, regional forms, etc.)
Blood has three main aspects, as well as her combined role as Fate with her sisters: the Bloody Crow, the Golden Woman, and the Bringer of Strife
The Bloody Crow is the face of Death that Blood embodies – Death-the-Exultant, Death-as-Eater, the death that delights in bloodshed and carnage, that revels in war and sacrifice of living creatures. This is the Power of the carrion-eaters, the scavengers, the ravens and vultures and other animals that feast on the dead and dying. She is the collector of tears.
The Golden Woman is the giver of treasure and the receiver of sacrifices. She holds the powers of fire and rebirth, of prophesy and destiny. She is a powerful magician, just as her sisters are, though her talents lie in the realm of conflict, fate-weaving and what was known to the Norse as seiðr – an ecstatic form of magic involving such things as cord and thread, spinning/weaving fate or wyrd, chants and other vocal spells and charms, and which was very often sexual in nature. She is also, in this aspect, the power of reciprocity – that which was given is given in turn, that which was taken is taken back again, and so the connections between all things are strengthened. This aspect is the most like her second father, Abundance
The Bringer of Strife is the power that laughs in battle, that rejoices in conflict, that destroys for the sake of itself, that burns everything to the ground and salts the earth. This is the most malevolent aspect of Blood, as she is something we utterly fear, the joy and mad ecstasy of death and destruction. She is the queen of the battle-maidens, the melter of courage, the weakener of resolve, and while she can be called upon to afflict your enemies, she can also turn on you as well in the blink of an eye as it pleases her. She carries famine and deprivation, loss and ruin in her wake. This aspect is the most like her first father, Wildness
The fourth major aspect of Blood is her role as Watcher of the Weird Sisters. She plies the thread of the past into the yarn that is used to set the warp of the loom weaving the Great Pattern. She sees all that currently is, and her hands touch everything that exists in the present, marking them for destruction or exaltation at her whim.
In all her forms, she appears to me with pitch-black hair, blood-red lips and blood-stained claws, sharp teeth and sharper eyes, and skin the color of pure gold, or dark as night. She adorns with gold and feathers, and usually carries a spear in one hand, and a bag of sand or distaff in the other.

Common mistakes about this deity
Blood is also not the Power of Death in Waincraft, though she does represent one of the “types” or faces of death
She is not strictly a war goddess, though war can and does fall under her influence. Instead, she is a power of strife, conflict, chaos, sacrifice and blood, all of which are a part of war as well as other things.

Festivals, days, and times sacred to this deity
Festival of the Dead
Festival of Reciprocity
Blood Moon
Crow Moon
Twilight

How does this deity relate to other gods and other pantheons?
Destroyer/Fate

How does this deity stand in terms of gender and sexuality?
Blood is the wild abandon of feminine power that is feared and denigrated by insecure or controlling masculinity. She is the patriarchal nightmare of the devouring, destroying woman incarnate.
All of the Powers of Waincraft fall along a multisexual spectrum, and Blood is no exception. She has minimal long-term relationships with the other Powers beyond her sisters, but much of her magic and power comes from her freely distributed sexuality to any and all. She has many similarities in this to Passion, but her charms are bloodier and wilder.

What quality or qualities of this god do you most admire? What quality or qualities of them do you find the most troubling?
I admire her resolve, her determination, her ability to completely remake herself after being destroyed, and her ability to teach us to do the same.
At the same time, of all the Powers, she represents some of the most unsavory and undesirable aspects of existence – pain and suffering, carnage and slaughter, chaos and malevolence and deprivation. She is not a Power to be called on lightly, or to be dismissed out of hand.

A quote, a poem, or piece of writing that you think this deity resonates strongly with
It will have blood, they say; blood will have blood. – William Shakespeare
Blood alone moves the wheels of history. – Martin Luther
The harder the conflict, the more glorious the triumph. – Thomas Paine
I exhort you also to take part in the great combat, which is the combat of life, and greater than every other earthly conflict. – Plato
It is courage, courage, courage, that raises the blood of life to crimson splendor. Live bravely and present a brave front to adversity. – Horace
All war is deception. – Sun Tzu
All the soarings of my mind begin in my blood. – Rainer Maria Rilke
Bad things do happen; how I respond to them defines my character and the quality of my life. I can choose to sit in perpetual sadness, immobilized by the gravity of my loss, or I can choose to rise from the pain and treasure the most precious gift I have – life itself. – Walter Anderson

Any suggestions for others just starting to learn about this deity?
Help an abuse victim, rescue animals, learn defensive magic or martial arts, mentor someone, reduce clutter and superfluity in your life, sacrifice unnecessary possessions or self-defeating attitudes, contemplate the importance of sacrifice and reciprocity, learn to accept that all things must end, learn to start over after failure.